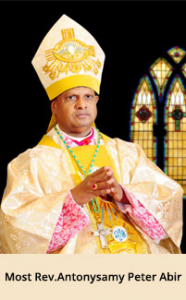 Bishop Antonysamy Peter Abir, was born on 07 April 1952, in Sathipattu, Archdiocese of Pondicherry and Cuddalore. He studied at the R.C. Sathipattu Elementary School and then at St. Joseph’s Higher Secondary School in Cuddalore. Subsequently, he attended St. Joseph’s College, Trichy. In 1970 he entered the St. Agnes Minor Seminary Cuddalore and from 1971 to 1979 he studied at Sacred Heart Major Seminary Poonamelle, Chennai. He was ordained a priest on 1st May 1979 for the Archdiocese of Pondicherry and Cuddalore.

Later, from 1981 to 1983, he obtained a Master’s degree in Biblical Theology at St. Peter’s Pontifical Institute, Bangalore. From 1985 to 1987 he studied at the University of Tirupathy, obtaining Masters degree in Literature and History. From 1990 to 1993 he studied for a licentiate in Sacred Scripture at the Biblicum, Rome and obtained the Doctorate in Sacred Scripture from the Pontifical Gregorian University (1993 -1995). After ordination he held the following positions: