Home > About Us > Patron 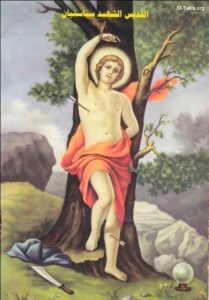 Saint Sebastian (c. AD 256 – 288) was an early Christian saint and martyr. According to traditional belief, he was killed during the Roman emperor Diocletian‘s persecution of Christians. He was initially tied to a post or tree and shot with arrows, though this did not kill him. He was, according to tradition, rescued and healed by Saint Irene of Rome, which became a popular subject in 17th-century painting. In all versions of the story, shortly after his recovery he went to Diocletian to warn him about his sins, and as a result was clubbed to death. He is venerated in the Roman Catholic Church.

According to Sebastian’s 18th-century entry in Acta Sanctorum, still attributed to Ambrose by the 17th-century hagiographer Jean Bolland, and the briefer account in the 14th-century Legenda Aurea, he was a man of Gallia Narbonensis who was taught in Mediolanum (Milan). In 283, Sebastian entered the army in Rome under Emperor Carinus to assist the martyrs. Because of his courage he became one of the captains of the Praetorian Guards under Diocletian and Maximian, who were unaware that he was a Christian.

According to tradition, Marcus and Marcellian were twin brothers from a distinguished family and were deacons. Both brothers married, and they resided in Rome with their wives and children. The brothers refused to sacrifice to the Roman gods and were arrested. They were visited by their parents Tranquillinus and Martia in prison, who attempted to persuade them to renounce Christianity. Sebastian succeeded in converting Tranquillinus and Martia, as well as Saint Tiburtius, the son of Chromatius, the local prefect. Another official, Nicostratus, and his wife Zoe were also converted. It has been said that Zoe had been a mute for six years; however, she made known to Sebastian her desire to be converted to Christianity. As soon as she had, her speech returned to her. Nicostratus then brought the rest of the prisoners; these 16 persons were converted by Sebastian. Chromatius and Tiburtius converted; Chromatius set all of his prisoners free from jail, resigned his position, and retired to the country in Campania. Marcus and Marcellian, after being concealed by a Christian named Castulus, were later martyred, as were Nicostratus, Zoe, and Tiburtius.

Sebastian had prudently concealed his faith, but in 286 it was detected. Diocletian reproached him for his supposed betrayal, and he commanded him to be led to a field and there to be bound to a stake so that certain archers from Mauritania would shoot arrows at him. “And the archers shot at him till he was as full of arrows as an urchin is full of pricks, and thus left him there for dead.” Miraculously, the arrows did not kill him. The widow of Castulus, Irene of Rome, went to retrieve his body to bury it, and discovered he was still alive. She brought him back to her house and nursed him back to health.

Sebastian later stood by a staircase where the emperor was to pass and harangued Diocletian for his cruelties against Christians. This freedom of speech, and from a person whom he supposed to have been dead, greatly astonished the emperor; but recovering from his surprise, he gave orders for Sebastian to be seized and beaten to death with cudgels, and his body thrown into the common sewer. A pious lady, named Lucina, admonished by the martyr in a vision, privately removed the body and buried it in the catacombs at the entrance of the cemetery of Calixtus, where now stands the Basilica of St. Sebastian.

Remains reputed to be those of Sebastian are housed in Rome in the Basilica Apostolorum, built by Pope Damasus I in 367 on the site of the provisional tomb of Saints Peter and Paul. The church, today called San Sebastiano fuori le mura, was rebuilt in the 1610s under the patronage of Scipione Borghese. St. Ado, Eginard, Sigebert, and other contemporary authors relate that, in the reign of Louis Debonnair, Pope Eugenius II gave the body of St. Sebastian to Hilduin, Abbot of St. Denys, who brought it into France, and it was deposited at Saint Medard Abbey, at Soissons, on 8 December, in 826. Sebastian’s cranium was brought to the town of Ebersberg (Germany) in 934. A Benedictine abbey was founded there and became one of the most important pilgrimage sites in southern Germany. It is said the silver-encased cranium was used as a cup in which to present wine to the faithful during the feast of Saint Sebastian.