Home > About Us > Cathedral 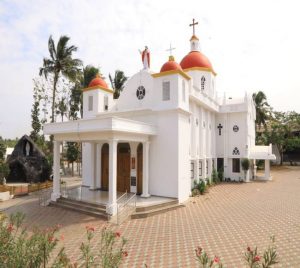 In the beginning of the 18thCentury Catholic families mostly from Trichy, Tanjore and Dindigul first came and settled at Gnanipalayam near Kalpathi on the neighborhood, just three-kilo meters north of Palakkad. It is from here they spread out, first to Kallampilly (Periya Kovilpalayam) then to Kollengode, Perumkulam, Vandazhy, Vadakkanchery, Athicode etc.  Fr. Francis Bavoni, a Jesuit Priest, started this mission here in 1761.

Fr. Francis Bavoni, SJ, obtained from the Raja of Palakkad a piece of land in Peria Kovilpalayam in 1761 and built a Church, which became the Mother Church of the entire Palakkad District. In the middle of the 18thCentury some Catholics of the Panchamas from Kolar from the State of Karnataka, seem to have come down and settled at Siluvaipalayam in Palakkad.Fr. Francis Bavoni, SJ, built a Chapel at Sultanpet, around 1763-65. Rev. Msgr. Marion de Bresillac, MEP, the first Bishop of Coimbatore, built the present Chapel at Siluvaipalayam.  Mgr. Clement Bonnad, MEP, the Vicar Apostolic from Pondicherry, had visited Palakkad in 1850 itself. From 1850 onwards Palakkad had continuously its own Parish Priests. Two Schools – one English medium and another Tamil medium – were started in 1851 by Fr. Louis Ravel MEP, the first Parish Priest of this Church.  He also built in 1865 a convent for the Presentation Sisters of Coimbatore, whom he founded.  However Fr. Joseph Bardou MEP, built the present Church, dedicated it to St. Sebastian in 1862. The present beautiful architectural design of the church is based on St. Paul’s Cathedral, London and Santa Maria Della Salute, Venice. In certain angles it resembles Victoria Memorial, Kolkata (which was built much later in 1925). This Church has become a place of Pilgrimage, drawing pilgrims from as far away as Ooty. Fr. Aloysius (1877-82) built the western bell tower and Fr. Jules Theophile Gudin, MEP, (1874-1881) built the eastern tower.  To celebrate the 150th year of this Parish, the old Church was very much renovated and beautified by Fr. K. P. Vincent and the renovated Church was consecrated by Bishop M. Ambrose on 24 August 2002.

There was a convent and a dispensary of FMM Sisters in 1894, but it was closed down later. Bishop C. M. Visuvasam, in order to encourage vocations from this area, started a branch of the minor seminary of Coimbatore here but it was closed down within a short time. Palakkad had the distinction of providing one of the first four nuns to the Congregation of Presentation Sisters, Coimbatore. They were the daughters of Mr. Maria Pragasam Pillai.  Fr. Jean Marie Juilen Pottier, MEP (1859-1902) got a grant of thirty acres of land from the then Collector and his friend Mr. Bernett to start a school and an orphanage in the area in 1865.  In view of the new Latin Diocese in the district of Palakkad, four acres of land was purchased at Olavakode by Bishop M. Ambrose in 1994.

Since the old Presbytery that existed in the campus of St. Sebastian’s Church was in a dilapidated condition, Fr. A. S. Madalaimuthu constructed a new Presbytery and Bishop Thomas Aquinas blessed it on15 December 2004.  Fr. A. Antonysamy was appointed the Parish Priest here in 2005 and he continued to work here until 2008.  Fr. A. S. Madalaimuthu was appointed here as ParishPriest again in 2008 and was the Vicar Forane of the Palakkad Vicariate.

This Parish of St. Sebastian was declared the Cathedral Church Parish of the newly erected Diocese of Sultanpet on 16 February 2014 when the new and the First Bishop Most Rev. Dr. Antonysamy Peter Abir was consecrated.  Fr. A. S. Madalaimuthu was appointed the Parish Priest of this elevated Cathedral.  He was also appointed the Vicar General of the Diocese of Sultanpet.  Then Fr. Louis Maria Pappu was appointed the Parish Priest in June 2014 and was named the Vicar Forane of Palakkad Vicariate of the new Diocese.

From the year 2015, during the time of Fr. Louis Maria Pappu, the Cathedral Church had witnessed tremendous growth and transformation.  A catechism hallway was built behind the Parish House in 2015.  A big Community Hall (150 feet long and 65 feet wide) was built in the Cathedral campus in 2015. Wooden paneling works were done in the Sanctuary, behind the altar and by the side walls inside the Church.  Wooden layers and carvings were made to beautify the altar and the walls of the Church in the year 2017.  Four new niches were made for St. Sebastian, St. Antony, St. Joseph and for Our Lady of Health in the same year.  Forty new pews of 10 feet long were placed in the Church in 2017.